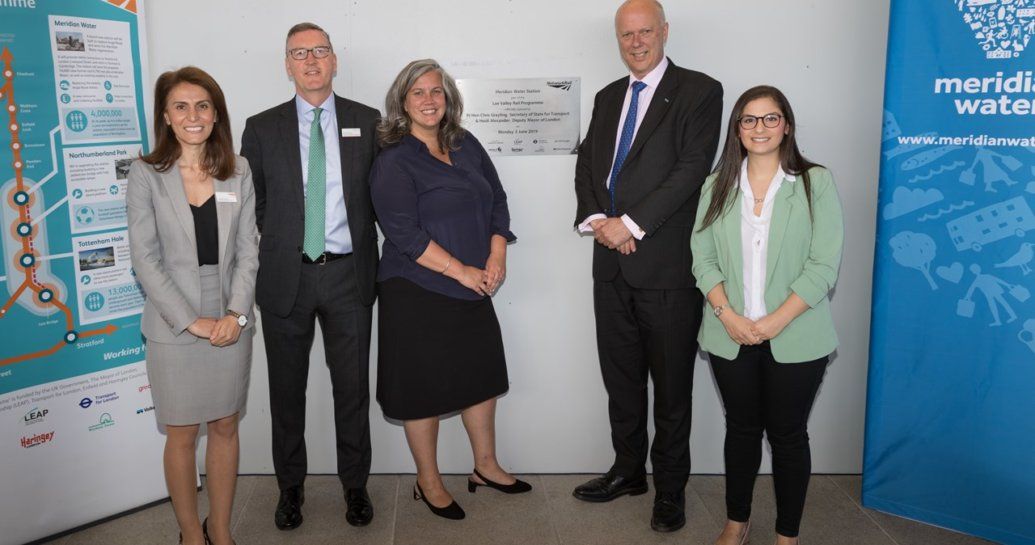 Meridian Water, the newest station in London has officially been opened in a ceremony attended by Rt Honourable Chris Grayling MP Secretary of State for Transport and Heidi Alexander, Deputy Mayor of London for Transport. Representatives from Network Rail, Enfield and Haringey councils and Greater Anglia, who will manage the new station, were also in attendance.

Meridian Water is part of a £6bn development of the overall area and is being led by Enfield Council. This major project will see 10,000 new homes created along with thousands of new jobs. The new station replaces Angel Road and gives improved accessibility for passengers with step-free access.

Delivered by Network Rail and the principal contractor VolkerFitzpatrick, the station is part of a wider range of upgrades to this railway line. They include:

“As part of our commitment to modernise the rail network, I am delighted to announce the opening of the new, state of the art Meridian Water station. By working closely with Enfield Council and Network Rail, we have provided significant investment to improve this vital rail link, which will allow more people access to the railway and facilitate the council’s plans to increase housing in the area.”

“The Lee Valley Rail Programme is an excellent example of how investing in transport directly supports regeneration and growth. I’m delighted that the GLA and TfL have worked alongside Network Rail and other organisations to fund this important improvement to the West Anglia line, including the new Meridian Water station. These improvements to the transport network will make this part of London an even more appealing place to live, work and visit.”

“The delivery of the Lee Valley Rail Programme is the culmination of years of hard work. Reducing congestion at busy stations and building a brand new one for the people of Enfield will transform journeys as our network gets busier. This collaborative programme shows how the rail industry can work together with external partners to fund and deliver rail upgrades that will not only benefit passengers by improving their travelling experience but also benefit the communities where they live through regeneration.”

“Over the last year Meridian Water project has gathered real pace and many of the elements of this £6bn project have coming together. With the station now open and service improvements to follow we are forging ahead with this scheme, to deliver thousands of new homes and jobs for local people. We have also selected a developer to deliver the first phase of homes and workspaces with the first completions due in 2022 and we have already started work on the second phase of the development which will be 100 per cent affordable housing."

"There will also be fantastic opportunities for local people and businesses to locate their enterprises on excellent sites within Meridian Water which are not due to be developed as part of the wider scheme for a number of years. The opening of the station – which has been project managed and funded by Enfield Council underpins the whole development and we are very pleased that it will act as a springboard to allow the whole of the project to thrive as well as massively benefiting the existing population of Angel Edmonton.”

“We are very pleased to welcome passengers to Meridian Water station. North London is a region full of potential. It’s an area deserving of investment and improved transport connectivity for the people who live and work there. The station provides the area with better rail options, initially with weekday peak time direct trains running south to Stratford, enabling connections to London Liverpool Street, and north to Bishops Stortford, for connections to Stansted Airport and Cambridge."

“From September 2019 there will be a much better service, including at weekends, as the third track provides the additional capacity that enables us to operate two trains per hour throughout the day between Meridian Water and Stratford. We are committed to improving rail travel for all customers. By continuing to work in partnership with local authorities, the London Local Enterprise Partnership and Network Rail and other key stakeholders, we believe Meridian Water will have a positive impact. Further benefits will also follow with the introduction of our entire fleet of new trains, which are due to be rolled out across our network, including on Meridian Water services, by the end of 2020.”