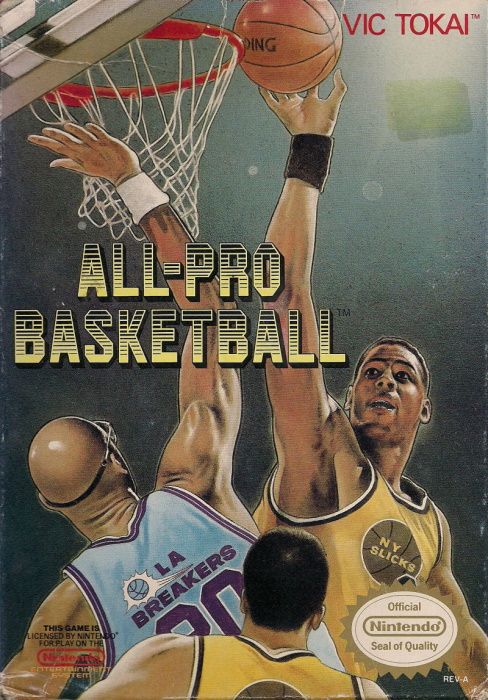 Click the button below to buy All-Pro Basketball NES.

*All-Pro Basketball, known as Zenbei!! Pro Basketball in Japan, is a basketball video-game developed by Aicom and published by Vic Tokai for the Nintendo Entertainment System. It is played using two teams of five players on a full length basketball court, and a roster of eight different fictional teams.

There are four modes of gameplay. One-player, which pits the player in a solo match against a computer opponent. Two-player, which is a co-op match against a computer opponent. Versus, which is a two player mode that pits the players against each other. And finally, Watch, which allows the player to watch a computer-controlled match. The court is displayed in a vertical fashion, from a top-down perspective, revealing only half of the court at a time. If the ball travels past the half-court line, the screen goes black temporarily and changes over to the other half of the court (which looks identical, save for the color of the floorboards). This is done to alert the player that they have travelled to a different side of the court. When a player attempts a slam dunk, gameplay will pause and cut to a detailed animation of the maneuver.