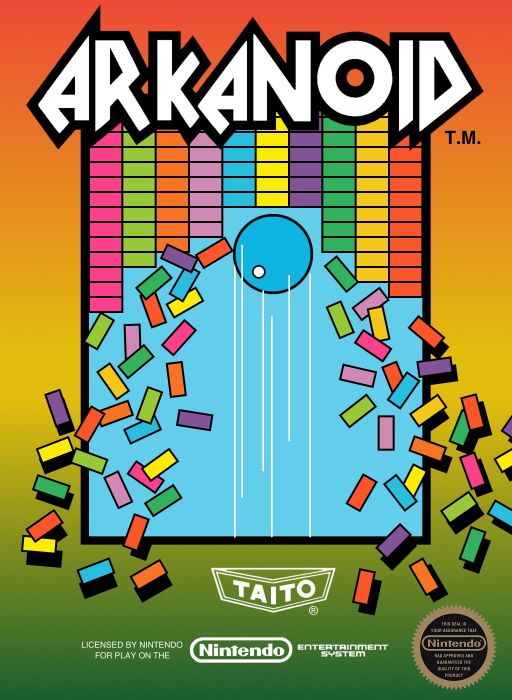 *Arkanoid is a 1986 block breaker arcade game developed and published by Taito. In North America, it was published by Romstar. Controlling a paddle-like craft known as the Vaus, the player is tasked with clearing each formation of colorful blocks, accomplished by deflecting a ball towards it without letting it leave the playfield. Some blocks contain power-ups that have various effects on the player, such as increasing the length of the Vaus, creating several additional balls, or turning the Vaus into a laser cannon.

Created by Taito designers Akira Fujita and Hiroshi Tsujino, Arkanoid was made to expand on the block breaker concept established in Atari's Breakout, a successful game in its own right that was met with a large wave of similar clone games from other manufacturers. It was part of a contest within Taito, where two teams of designers had to complete a block breaker game and determine which one was superior than the other. The film Tron served as inspiration for the game's futuristic, neon aesthetic. Level designs were first sketched out on paper, before being programmed into the game and tested to make sure they were fun to play. The designs for the enemies and power-up items were originally 3D models that were converted into sprite art.

Early location tests for Arkanoid proved to be successful, and usurped Taito's initial expectations. The game was commended by critics for its gameplay, simplicity, addictive nature and drastic improvements over the original Breakout concept. It is considered important and influential, helping to revitalize the block breaker genre and set the groundwork for many games to follow. Arkanoid was ported to many home video game platforms, including the Commodore 64, Nintendo Entertainment System and mobile phones, and spawned a long series of sequels and updates over the course of two decades.