Note: This Add-On is only available to be purchased in the US

Created by DTM (Digital Train Model), the Train Simulator EMD SD45-2 faithfully re-creates the husky locomotive that was introduced in 1972. Powered by EMD’s unique 20-cylincer 645-series diesel powerplant, the SD45-2 was a refinement of the SD45 that had been introduced in 1966. As compared to its predecessor, the SD45-2 featured the improved electronics of the Dash-2 line and addressed the main-bearing and crankshaft problems that had plagued the big 20-cylinder powerplant in the SD45. At 70-feet, 8-inches long, the SD45-2 was nearly five feet longer than the SD45, which allowed EMD to utilize vertically mounted radiators on the Dash-2 rather than the SD45’s trademark flared radiators.

Far-and-away the largest fleet of standard SD45-2s belonged to the Santa Fe Railway, which purchased 90 of the potent units for priority main line duty. In the mid-1980s, most of Santa Fe’s SD45-2s were put through a rebuilding program at the railroad’s San Bernardino (California) Shops. While most were rebuilt largely in-kind, eight units were rebuilt as cab-less “booster” units. Most of the remanufactured SD45-2s continued on to serve Santa Fe successor BNSF and some remained in service on BNSF into 2014.

You can now put the SD45-2 – in stylish Santa Fe “yellow bonnet” livery – to work. DTM’s SD45-2 is an authentic and highly realistic re-creation of the big diesel, and the pack not only includes the standard SD45-2 as constructed by EMD for the Santa Fe, but also two versions of the San Bernardino Shops remanufactured cab-less “B” units. The Santa Fe (AT&SF) SD45-2 DLC includes a superb selection of freight rolling stock, including AT&SF’s iconic CE-1 class steel cupola caboose; two versions of 50-foot boxcars; flatcars with multiple loads; and a 3-bay offset-side open-top hopper. And the pack also includes four career scenarios putting the SD45-2 to work on the Train Simulator Cajon Pass route. 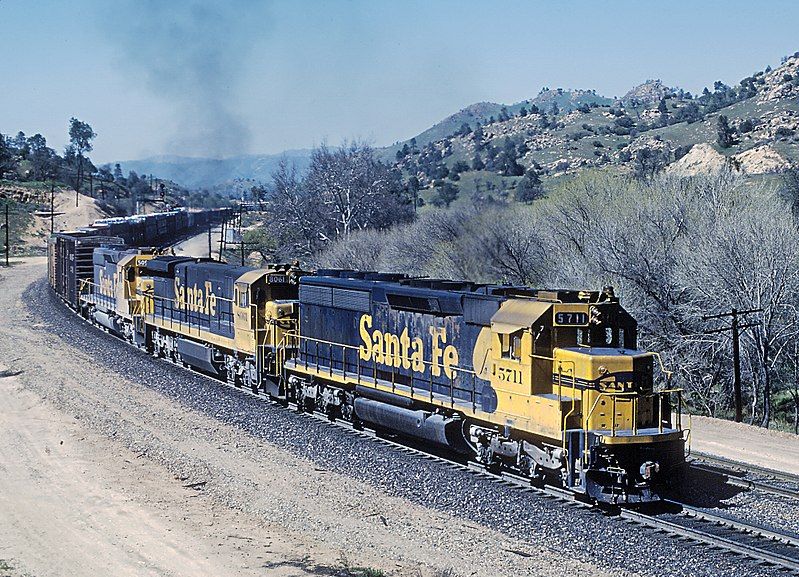