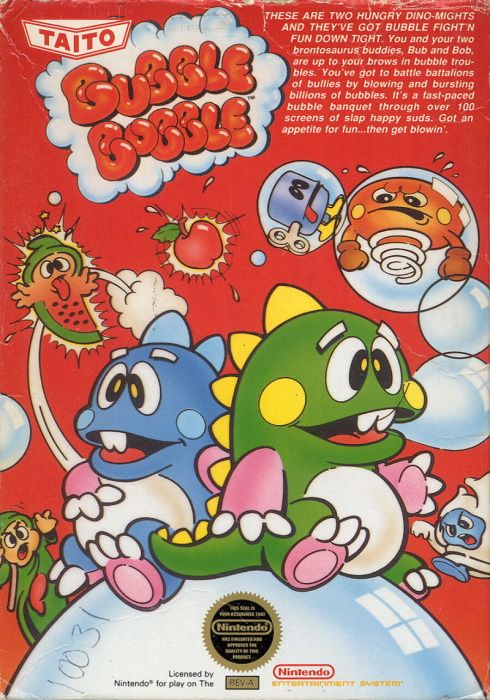 *Bubble Bobble is a platform game by Taito, first released in arcades in 1986 and later ported to home systems by Toei Company. The game, starring the twin Bubble Dragons Bub and Bob, tasks players with traveling through one hundred stages, blowing and bursting bubbles, jumping on and off blown bubbles to navigate level obstacles, dodging and eliminating enemies, and collecting a variety of items including some that carry power-ups and significant bonuses. For example, the red shoe allows Bub and Bob to move faster, while wrapped candies cause Bub and Bob to blow bubbles faster, and blow bubbles at greater distances. Other items, such as umbrellas, allow to skip numerous levels, moving closer to the final level. The game became popular and led to a long series of sequels and spin-offs. The main goal of the game is to rescue Bub and Bob's girlfriends from the Cave of Monsters. The game has multiple endings, which depend on the player's performance and discovery of secrets.

Bubble Bobble was ported to many home video game consoles and computers, including the Commodore 64, Amiga, Nintendo Entertainment System, MSX2 and Sega Master System — the last of these has two hundred levels as opposed to the arcade version's 100 levels, and was released in Japan as Final Bubble Bobble.