Captain Planet and the Planeteers NES 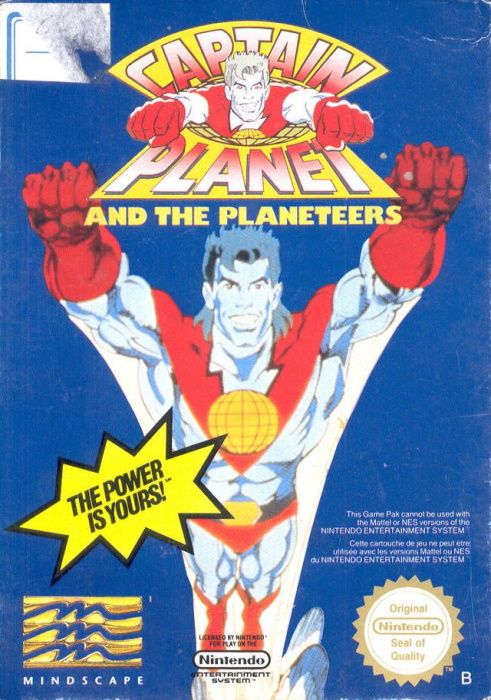 *Captain Planet and the Planeteers was a video game released for various platforms in the early 1990s, loosely based on the environmentalist animated series, Captain Planet and the Planeteers and produced by the third party developer Mindscape Inc. Three different versions were developed to suit three different platform capabilities, each with a markedly different gameplay. The Amiga/Atari ST version was released in 1991, as was the ZX Spectrum/Amstrad CPC version, while the Nintendo Entertainment System version was released in 1991.

The NES version of the game has five levels, each of which are divided into two different types of stages. The first stage involves controlling the international teen heroes (Planeteers) flying their Eco-Jet to an enemy fortress, while trying to avoid the instant death that occurs by touching any of the scenery or getting hit by the various projectiles or birds. The second stage involves controlling Captain Planet himself as he fights his way to an ecovillain from the TV series. The NES version features levels set in the Yellowstone National Park, the Atlantic Ocean, Africa and Antarctica.

The NES version of the game was panned by most video game critics for its weak graphics, limited playability and difficulty. Mindscape was one of the many third party publishers of NES games that had a reputation of releasing low quality products. The difficulty in the game arose from the fact that the various powers of the geocruiser or Captain Planet had to be cycled through while the player was being actively attacked.