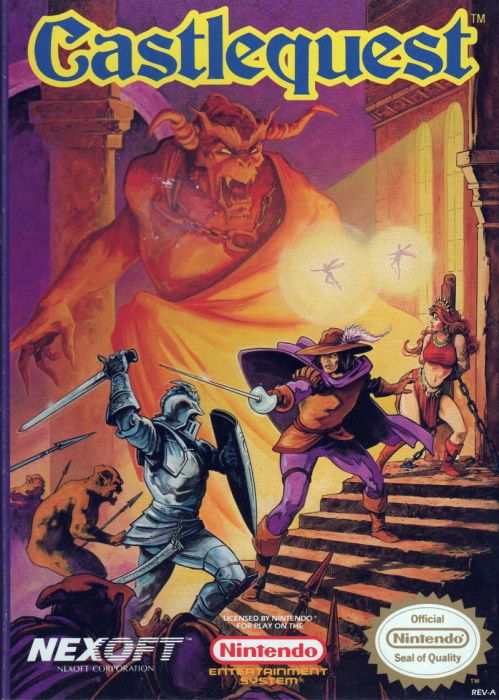 Click one of the buttons below to buy Castlequest NES. Different vendors often have sales at different times, always check all vendors for the Castlequest NES lowest price.

*Castlequest (known in Japan as Castle Excellent (キャッスルエクセレント, Kyassuru Ekuserento)) is an adventure/puzzle-hybrid video game. It was developed and published by ASCII Corporation in 1985 for the FM-7, PC-88, and Sharp X1. Additional versions followed in 1986 for the Famicom and MSX, and was subsequently released in 1989 for the NES in the United States by Nexoft Corporation.

It is the sequel to The Castle, released in 1985 for the MSX, SG-1000, and other systems (though not the NES). Like that game, it is an early example of the Metroidvania genre.

In the Family Computer and NES versions, each room is wider than the screen, so the display scrolls horizontally as the player moves. Because of the different room sizes, many adjustments to the room layouts were made in comparison to the MSX version. In the Family Computer version, the player starts with 4 lives, and the game supports the Famicom Data Recorder and ASCII Turbo File peripherals for saving and loading game progress. When the game was reworked for the US NES release, the save/load feature was removed (the NES does not have the 15-pin expansion port which the Turbo File connects to). However, the player has 50 instead of 4 lives initially.