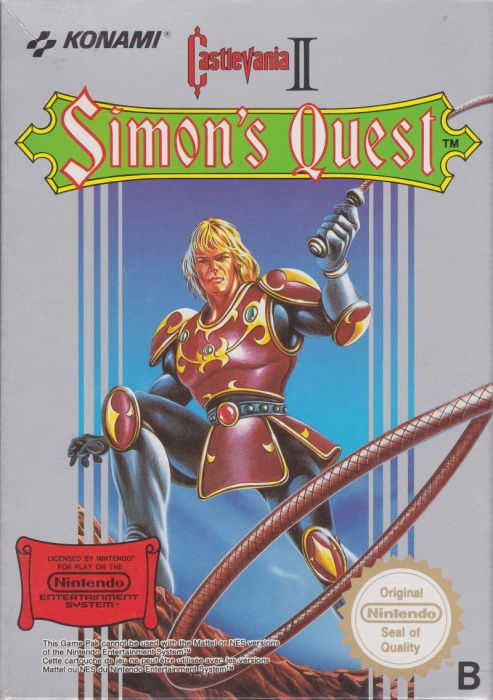 *Castlevania II: Simon's Quest is a platform-adventure video game produced by Konami. It was originally released for the Famicom Disk System in Japan in 1987 and for the Nintendo Entertainment System in North America in 1988. It is the second Castlevania title released for the NES, following the original Castlevania. Set sometime after the events of the first installment, the player once again assumes the role of vampire hunter Simon Belmont, who is on a journey to undo a curse placed on him by Dracula at the end of their previous encounter. With Dracula's body split into five parts, Simon must find and bring them to the ruins of his castle and defeat him.

Simon's Quest was designed by Hitoshi Akamatsu, who also directed Castlevania and Castlevania III: Dracula's Curse on the NES. It was released on the FDS on August 28, 1987 in Japan. Originally titled Dracula II in Japan, Akamatsu came up with the title Simon's Quest for the game's release in Western territories. When asked if Metroid had any influence on the development of the game, Akamatsu instead cited Maze of Galious, another platform-adventure game by Konami that features puzzle solving.

It was eventually developed for cartridge release on the NES in North America on December 1, 1988, and in Europe on April 27, 1990. Because of hardware differences between the FDS and NES, there were changes between the versions designed for both consoles. The FDS version features a save system, as other FDS games also featured at the time. The NES version instead uses a password function to return to specific sequences from the game. The FDS medium had a data storage limitation of 862 kilobits of slow access, whereas bank-switching techniques and solid memory costs allowed cartridges to have comparable data space with much faster access. The developers used the space to improve the music quality for the game, adding percussion samples and re-arranging the melodies to take advantage of the technology. Other changes were made to correct several grammatical and spelling errors in the translation, such as rendering of the protagonist's name as "Simmon Belmont", in the game's endings. Most of the original artwork for Simon's Quest and other early Castlevania titles was lost during the Great Hanshin earthquake of 1995.

Click below to view/download a PDF version of the Castlevania II: Simon's Quest NES manual