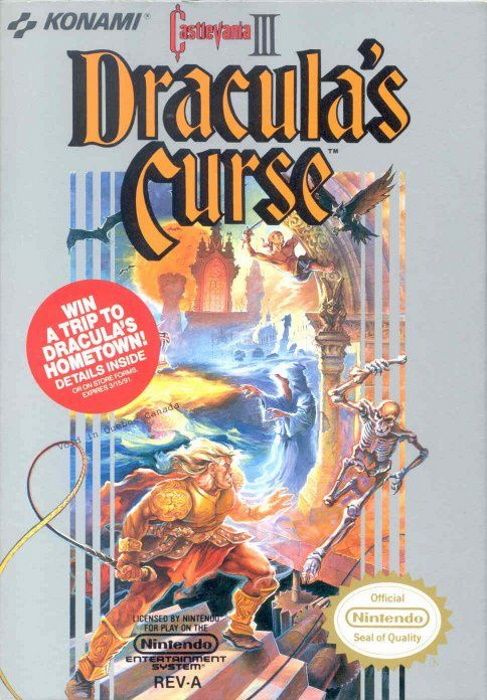 *Castlevania III: Dracula's Curse is the third Castlevania video game produced for the Nintendo Entertainment System. It was published by Konami in Japan in 1989, and in North America in 1990, and in Europe by Palcom in 1992. It was later released on the Wii Virtual Console.

The North American and PAL versions have several hidden features that can be accessed by entering a certain name for the player, which include starting the game with 10 lives (by entering the name "HELP ME"), the option to start the game with any of the three spirit partners, and to access the second, more difficult quest. These features are not present in the Japanese version.

Castlevania III was the first game in the series to have different packaging artwork outside Japan, designed by Tom Dubois using alkyd. It was inspired by Ray Harryhausen. Dubois would also go on to design the North American packaging for Super Castlevania IV, Castlevania II: Belmont's Revenge and Castlevania Bloodlines.[

Click below to view/download a PDF version of the Castlevania III: Dracula's Curse NES manual