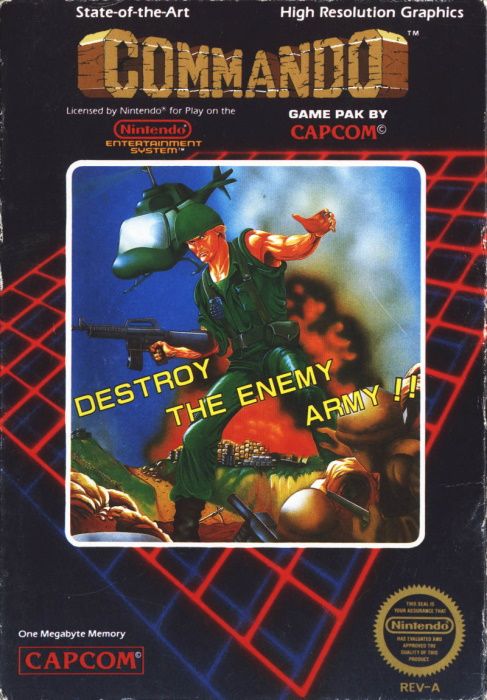 *Commando, released in Japan as Senjō no Ōkami (Japanese: 戦場の狼, lit. "Wolf of the Battlefield"), is a run and gun, vertically scrolling arcade game released in 1985, unrelated to the 1985 film of the same name. Its influence can be seen in various later games in the shooter game genre. Versions were released for various home computers and consoles.

A home version of the game developed by Capcom was released for the Nintendo Entertainment System. Activision released a port of the game for the Atari 2600 and INTV released a port for the Intellivision, also an Atari 7800 version by Sculptured Software was released in 1989. Elite released versions for many home computers. The BBC Micro and Acorn Electron versions were developed under contract by Catalyst Coders, while Elite developed the Amiga, Atari ST, Acorn Electron, ZX Spectrum, Amstrad CPC and Commodore 64 versions.

The Atari 8-bit version was created by Sculptured Software in 1989, and was intended to be released by Atari Corporation for the XE Game System. However, although the game appeared in Atari catalogs of the time, it never reached the market in spite of being completed. In the 2000s the game's prototype cartridge was found.