Conquest of the Crystal Palace NES 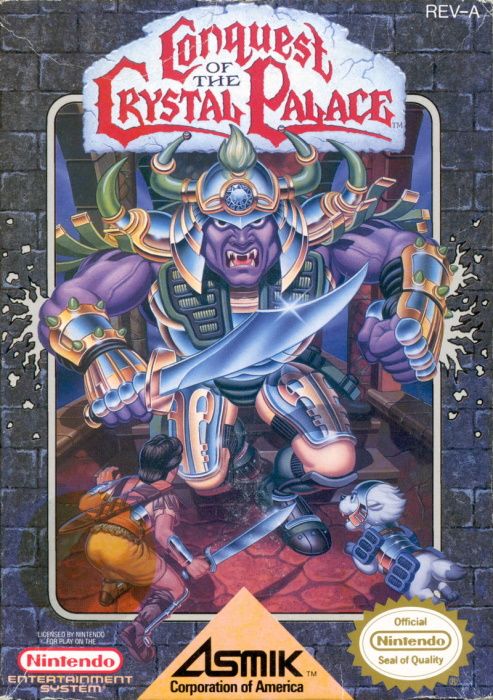 *Conquest of the Crystal Palace, known in Japan as Matendōji (魔天童子 (まてんどうじ), Demon Heaven Boy) is a 1990 Nintendo Entertainment System platform game developed by Quest and published by Asmik Corporation of America (subsidiary of J:COM).

Conquest of the Crystal Palace is an 2D action platform game. At the beginning of the game the player is given a choice between three crystals: A "Flight" crystal that increases Farron's jump height, a "Life" crystal that increases Farron's health, and a "Spirit" crystal that gives Farron unlimited use of a fireball attack. All of the crystal's effects can be temporarily replicated by power-ups that are dropped by defeated enemies or purchased through Kim's store. Farron's primary method of attack is his sword, though scrolls can be found or purchased to give Farron long-range abilities, and Zap can be summoned to damage enemies.[

As was the case with many NES games, Conquest of the Crystal Palace was subject to significant alteration for its US release. Enemies and stage components that resembled ghostly children were altered to insects and generic rocky terrain. The game's difficulty was generally reduced, and a cheat code was added that allowed the player to restore their health to full, make themselves invincible, or give themselves extra lives at any time.