It was on May 10, 1869 at Promontory, Utah that the “Golden Spike” ceremony made America one land, linked by rail from ocean to ocean. Facing each other on that historic day were two locomotives, Union Pacific 4-4-0 No. 119 and Central Pacific No. 60, the “Jupiter.”

Now, through the extraordinary craftsmanship of Smokebox, Central Pacific’s 4-4-0 Jupiter comes to life in Train Simulator!

Central Pacific No. 60, along with three sisters (“Storm,” “Whirlwind,” and “Leviathan”) were built by the Schenectady Locomotive Works in the summer of 1868. The wood-burning locomotives were designed for dual service, with 60-inch-diameter drivers and 16 x 24-inch cylinders and a total engine weight of 65,400 pounds. Following the historic events of May 1869, the Jupiter went on to a long career working for the Central Pacific and its successor, the Southern Pacific.

In the mid-1970s, the U. S. National Park Service had full-sized, operating replicas of UP No. 119 and the Jupiter constructed, a process that included the creation of engineering drawings of the locomotives. It is from those plans that Smokebox has created the Train Simulator version of the famed Jupiter. And as can be expected from the creator of the Union Pacific FEF-3 4-8-4 and AT&N 2-8-0, the Jupiter features extraordinary operating realism and exacting detail authenticity true to the wood-burning locomotives as built in 1868.

Image by Mr Snrub and used under Creative Commons license. 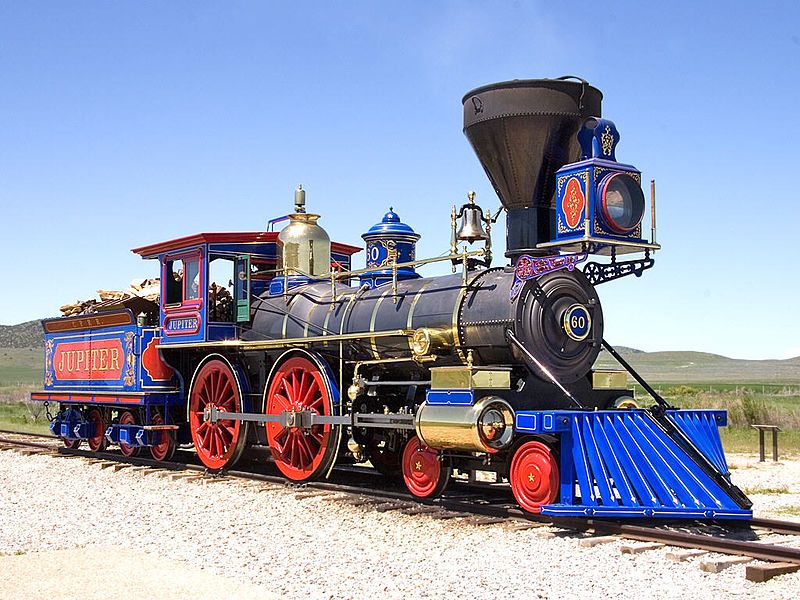