The Baldwin Centipede was one of the more unusual and heavy diesel locomotives in US railroading history, and now you can drive this heavyweight around the Horseshoe Curve in Train Simulator.

Arguably ahead of its time in terms of design, the Baldwin DR-12-8-1500/2 gained the ‘Centipede’ name from its odd wheel arrangement, so called as it was to have resembled the legs of a centipede. Given its heavy weight and numerous wheel sets, the Centipede offered the highest tractive power of any diesel locomotive in history.

In total, 54 units were produced and used in service by the Pennsylvania Railroad, Seaboard Air Line Railroad and National Railway of Mexico between 1945 and 1948. The Centipede was capable of operating independently or coupled in pairs, something the PRR successfully exploited to haul long passenger and freight trains across its network, including around the famous Horseshoe Curve.

However, the Centipede was beset with problems and by the 1950s most railroads had scrapped their fleet, due in part to their troublesome engines and the damage they caused to the track from their heavy weight.

Developed by Reppo, the PRR Baldwin Centipede is available for Train Simulator in Pennsylvania Railroad black livery. As well as a highly detailed cab interior, the locomotive also features a fully-detailed engine start-up and realistic engine scripting. Also included are a PRR baggage car and PRR dining car, the latter with a finely detailed passenger view.

Image by Otto Perry and used under Creative Commons license. 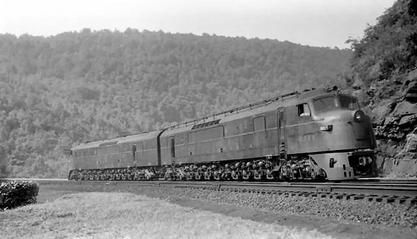