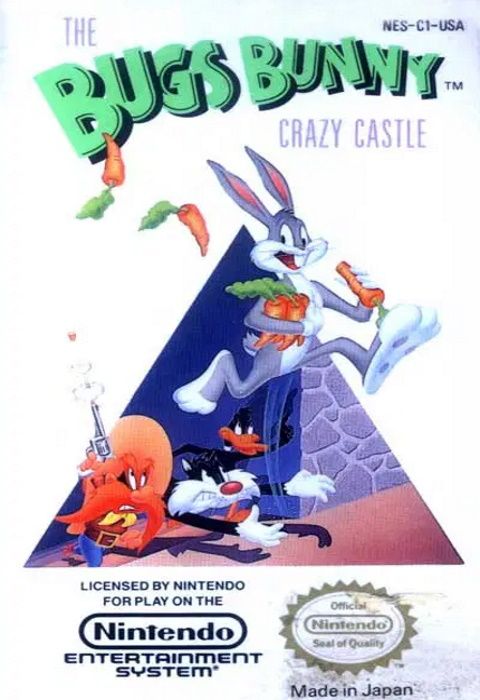 *The Bugs Bunny Crazy Castle, known in Japan as Roger Rabbit (ロジャーラビット) for the Family Computer Disk System, is a 1989 puzzle video game developed by Kemco for the Nintendo Entertainment System. It was also released for the Game Boy in Japan as Mickey Mouse (ミッキーマウス) and in North America as the same name as the North American NES release. It is the first game in Kemco's Crazy Castle series and the only one that was released for a home console; the four subsequent games in the series were released on handheld devices. (This only includes games with the Crazy Castle title; a game in the Japanese Mickey Mouse series was reworked into Kid Klown in Night Mayor World, which saw an NES release and a sequel on Super NES but was not otherwise connected with the North American Crazy Castle games.)

Three different versions starred three different cartoon characters: Bugs Bunny, and Disney's Roger Rabbit and Mickey Mouse, and were first released in 1989. The object of the game is to guide Bugs through a series of rooms collecting carrots. However, four rascals are guarding the castle: Sylvester, Daffy Duck, Yosemite Sam, and Wile E. Coyote.

The North American NES game was a modified version of the Japan-exclusive Family Computer Disk System title, Roger Rabbit. Roger Rabbit is the game's playable character, all the villains are all Who Framed Roger Rabbit-related, and hearts are collected. Due to Capcom owning the rights to develop and publish Disney film-based video games, as well as LJN already published Rare's own video game adaptation of the film, Kemco decided to use Bugs Bunny, due to him and Roger Rabbit both being rabbits, making it easier for Kemco to modify the Roger Rabbit game and release it outside Japan as The Bugs Bunny Crazy Castle.